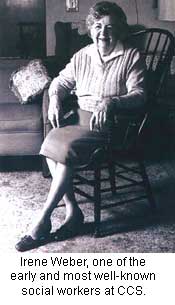 1918
The Diocese of Seattle begins organized efforts to aid the poor with Bishop Edward O’Dea’s establishment of the Seattle Council of Catholic Women. The organization selected and supervised boarding and group homes for orphaned and abandoned children, and helped place children for adoption. In 1937, it became the Association for Catholic Childhood, an organization dedicated to supporting and raising funds for Catholic Community Services (CCS).

1923
The Catholic Welfare Bureau is organized in Tacoma under the auspices of the Catholic Women’s Club. Its main focus is to assist homeless and orphaned children and single mothers.

1936
Catholic Charities of the Diocese of Seattle is officially formed by Bishop Gerald Shaughnessy to coordinate the administration of all the various works of charity in the diocese. 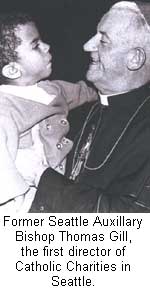 1940
Catholic Charities of the Diocese of Seattle is incorporated according to the laws of the State of Washington.

1977
Archbishop Raymond G. Hunthausen establishes the Office of Catholic Charities as an umbrella group to administer the archdiocese’s social programs.

1979
The Archdiocesan Housing Authority (AHA) is founded and incorporated.

1988
Catholic Charities is reincorporated as a separate corporate entity responsible for managing the social services and housing activities of the Church, with a Board of Trustees under the direct leadership of the Archbishop of Seattle. This allowed CCS to technically become an unrelated entity with the ability to move quickly, given the scope of its mission.

1990
The name of the corporation is changed from Catholic Charities to Catholic Community Services of Western Washington (CCSWW) to ensure a consistent image of CCS within the Archdiocese.

1993 – 1995
The Futures Process is undertaken in response to accelerating changes in education, health care, housing and social services. The final “Futures Report” redefines the agency’s ministry and mission, further unifying the philosophy of service and standards of practice.

Among the key action steps for the future:

2002
The Catholic Charities Foundation is established to further, promote and support the work of CCS and the AHA in the Archdiocese of Seattle.

2005
Archbishop Alex J. Brunett appoints an Episcopal Vicar for Catholic Charities. In the Church’s Canon Law episcopal vicars are appointed to exercise executive power over specific areas and to represent the bishop of a diocese to the persons and issues in these areas.

2007 – 2008
The Futures II planning process is undertaken to help chart the pathway of CCS and AHA into the future. The many questions and issues explored ranged from the organizations’ responses to the pressing needs of an increasing immigrant population, to the critical issue of making affordable permanent housing accessible, and distributed more equitably, to persons and communities of color. Futures II explored insights for the future; identified and named system-wide implications; and began the critical task of charting specific action steps.  Eight “Insights for the Future” emerged from the Futures II process:

During 2009, a reorganization of programs in CCS and CHS took place. During this reorganization, the shelter and transitional housing programs in CHS were transferred to the CCS King County Agency. The redefined focus of CHS became the development and management of affordable permanent housing with supportive services throughout Western Washington.

Through its Community Development Center, CHS develops housing and supports community development activities for a variety of community-based organizations and advocates for social change to end poverty and its disproportionate impact on communities of color.

2010
Archbishop Alex J. Brunett appoints the Very Reverend Gary Zender as Episcopal Vicar for Charities and Chair of the Boards of Trustees for CCS/CHS.

2011
With the sponsorship of Archbishop Sartain, CCS/CHS partners with the Washington State Catholic Conference and the Intercommunity Peace & Justice Center to launch an advocacy initiative called Dialogue for Justice with the goal of strengthening Catholic advocacy on behalf of the poor and vulnerable.

2016
Archbishop J. Peter Sartain appoints Dennis O’Leary, Executive Director of the Chancery, to be Chair of the Boards of Trustees for CCS/CHS.