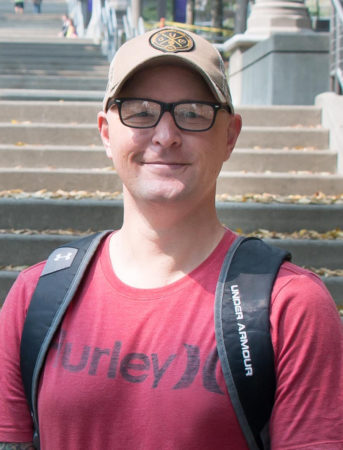 A Whidbey Island native, Brandon received special written permission from his grandparents to join the Army before his eighteenth birthday. The decision to retire after 20 years of service was a difficult one. During his transition the military offered job fairs and resumé help. However, once veterans retire, that resource is gone. “Many veterans don’t know they need help until they can no longer access it. We were great soldiers but that doesn’t translate to civilian resumes.”

“The adjustment is hard when you are a leader and you get out and you go from being in a key position of responsibility to square one,” Brandon said.

He started drinking heavily every night and lost his wife, daughter and housing. “I was at my rock bottom, riding on the bus day and night, homeless with all that I owned with me.”

Brandon kept on getting turned down for housing because he was living on an academic stipend and didn’t have the financial means to provide first month’s rent and deposit. He tried to negotiate with landlords and explain his situation but could not find housing.

He was referred to CCS Supportive Services for Veteran Families (SSVF) and started working with a case manager. Within two and a half weeks, CCS staff helped him find housing and provided speedy financial assistance with his application fee, first month’s rent and deposit.

“CCS was paramount to pull me out of a suicidal hole. I asked for help and help was given. I cannot believe that these programs are out there for veterans. Reaching out for help is a key component.”

CCS also helped Brandon with move-in essentials like kitchen items and later connected Brandon to a nonprofit that provided free furniture where Brandon picked out a mattress, couch, table, and other items.

Brandon is very proud that he found a place that supports him as a single dad. He now has joint custody of his two and a half year old daughter who has been “like a rock to him”. He looks forward to every weekend that he spends with her.

Brandon is currently taking classes at Tacoma Community College (TCC) with a focus on humanities. He changed his focus after working with CCS staff and wanted a way to help others like himself. “CCS did a tremendous job to help me get back to being a productive member of society,” he shares.